NASA needed tNASA has 12 Distributed Active Archive Centers (DAACs) that supply satellite data to scientists. Scientists were struggling with the obtaining the data, so NASA wanted to understand why. The research was designed to understand how and for what purposes DAACs are used. We interviewed 91 scientists that used 11 of the different sites, determining the different user types and where the problems emerged.

The Problem
NASA wanted to discover the best approach that the DAACs should take to address their main goal: the encouragement of scientists making new discoveries through data. Each of the 12 DAACs have different approaches for disseminating data from satellites. What was working across them? What wasn't?
My Contributions
Challenges

To make sure we were speaking to the right people, we had to be extra vigilant about the recruit. We requested people to contact from our client, which required coordinating communication between the main NASA group and multiple contacts for each of the DAAC groups. Once we received lists of people to contact, we had to ensure they met our requirements, and that there were 8 to 10 scientists that used the main DAAC site that we would be focused on.

Since the main goal of the DAACs is to provide data to scientists, we wanted to see what was happening when they were doing that task. To determine how the DAACs were performing in accomplishing this goal, we asked scientists to retrieve sample data from: 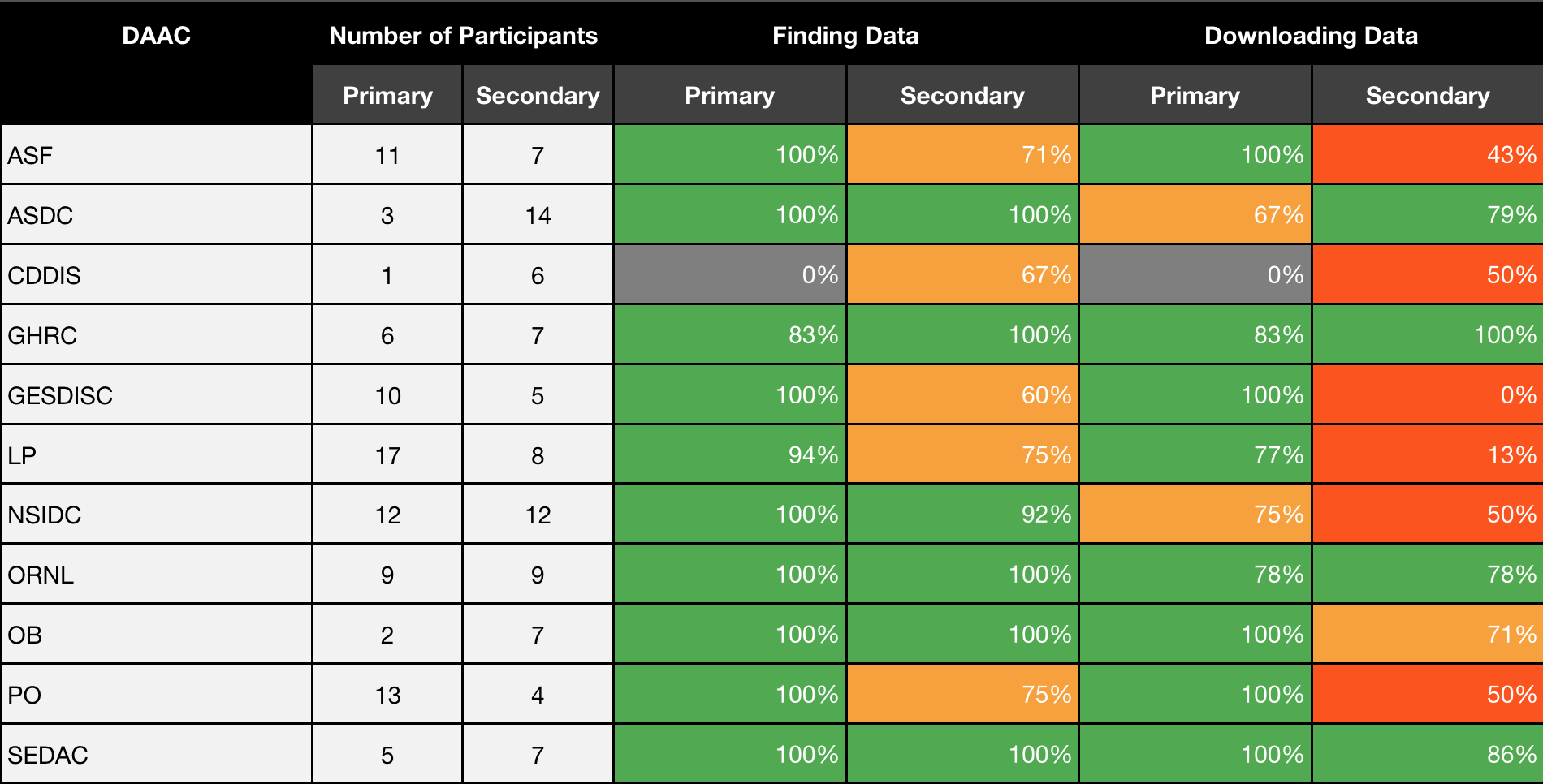 During the sessions, we:

CO-CREATION EXERCISE: This is an example of a participant's process created in the session to find and use data for a research question.

USER TYPES: These were the four user types discovered from the research.

We were then able to identify how these users were performing their research, where they would interact with the DAACs, and where the problems would emerge. 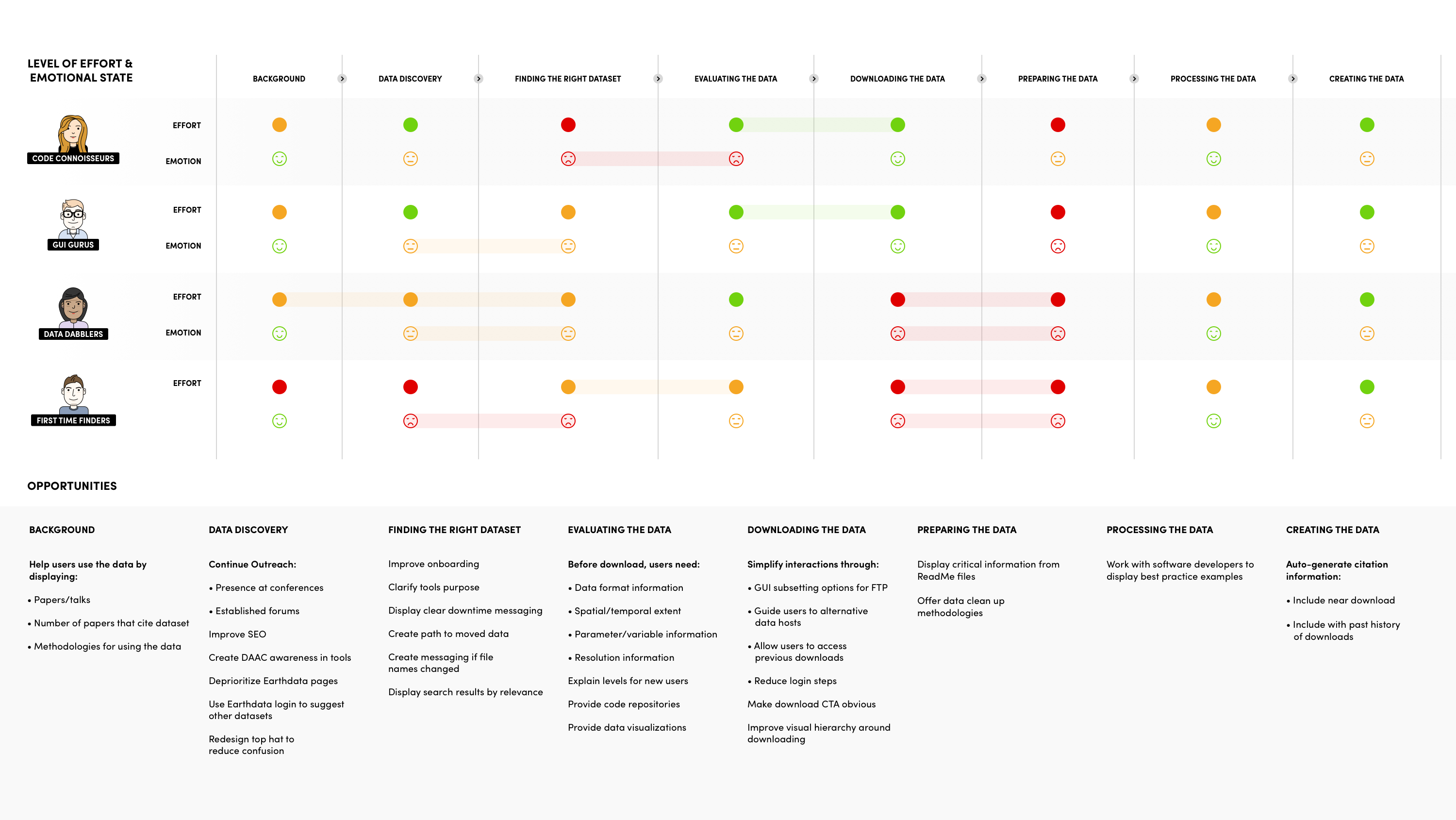 USER JOURNEYS: This was the main deliverable from the study. It captures the different user journeys for the four user types, and the opportunities for each stage of the journey. For a better look, download the PDF version.

In order to give resonance to the data, we described the findings in terms of the user types. We discussed how the different user types approached finding and retrieving data in general, and then how that impacted the individual DAACs.
‍
While this was a research project, we took advantage of my design skills when discussing recommendations. I created a series of wireframes with suggestions for how common design elements could be implemented across the DAAC. 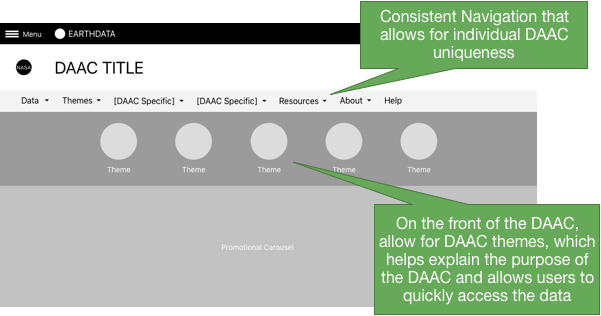 WIREFRAME SUGGESTION: This is an example of a high level wireframe created for the final deliverable.

This project was considered a great success. This was determined by: